Jagriti Yatra – A Journey of discovery and transformation

Jagriti Yatra is an ambitious train journey of discovery and transformation that takes hundreds of India’s highly motivated youth on an 18 day national odyssey. The aim is to awaken the spirit of entrepreneurship and to inspire young Indians living in the middle of the Indian demographic diamond (Rs 40 – Rs 120 per day) to lead development by taking to enterprise. By doing so, they can turn from job seekers to job creators.

I find it difficult to describe the entire experience, so I’ll stick to the people we met and the organizations we visited. We started and ended the train journey at Mumbai, yes we ate, slept, bathed and traveled in one train all the way! 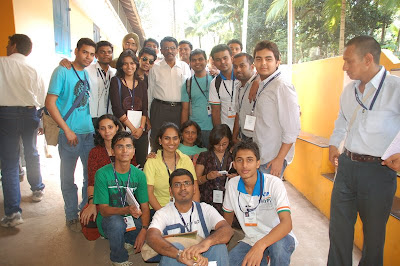 G.Vijayaraghavan, the man behind India’s first and currently the third largest IT park – Technopark, Trivandrum narrated the story of how he’d founded Technopark, his experience of dealing with the bureaucrats and his further ventures. He also had some pearls of wisdom for young entrepreneurs. The most striking aspect of the man was his resolve and value systems.

This was followed by a session by Jay Kumar and then Usha.S of Thanal, a non-profit organisation dealing with various environmental issues. Mr. Jay Kumar made a presentation on their zero-waste management initiatives and how they support various local women self-help groups. Ms. Usha held us in rapt attention with her commentary on the status of Indian agriculture. She covered various topics including GM foods, Organic farming, the downside of aping the western world for our green revolution, the ill effects of increasing urbanisation etc. She delivered a captivating lecture while painting an extremely bleak picture on the status of Indian Agriculture, which enlightened us on the way forward and the scope of youth entrepreneurs in the same. Check www.thanal.co.in 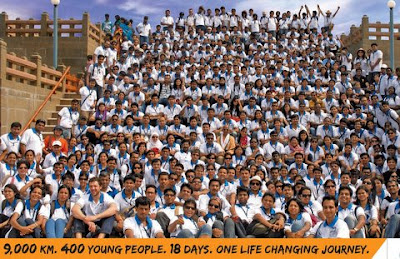 Aravind Eye Hospital was founded in 1976 by Dr. G. Venkataswamy. It is today the largest and most productive eye care facility in the world. It has a near perfect cross-subsidy model where those who are willing can pay (Approx 1/3rd), while the rest can avail the services for free (Approx 2/3rd), with no difference between the quality offered for both groups. The cost effectiveness of their work is awe-inspiring.

We were taken on a guided trip around Aurolab’s manufacturing facility for intra ocular lenses, sutures, surgical blades and medicines. They were manufacturing these products at a world class quality for just one tenth of the cost spent by their competitors.

A commendable thing about the whole Aravind setup is that they employ rural womenfolk for most of the jobs including cleaning, patient care and even technicians who work at Aurolab. The women are recruited from villages around each of their centres, trained and then employed.

Mr.Elango was a cental government chemical engineer-researcher before he quit his job to seek election for his Village’s Panchayat. He has been the leader of his Panchayat since the system has been introduced.

To combat homelessness and the ill effects of the caste system, he first convinced fifty non-Dalit and fifty Dalit families to shift into a new portion of the village called Samathuvapuram (crude translation for equal-place) where there would live in twin houses.

The villagers themselves made the bricks and built the houses and other common village infrastructure, thereby creating local employment. They continue to make bricks now and sell them creating further employment and trade!!

The cluster of villages around Kuthambakkam have also switched to Organic farming, formed self help groups and small scale industries that created finished products out of the agro-produce, thereby boosting employment and the local economy further! All projects are being implemented with around 75% financial support from the government.

Governments and communities across the country are now studying the model for implementation. Mr.Elango also spoke of his vision to personally mentor the transformation of 2,000 villages across the country by sharing the know-how with their local Sarpanches. Here, we also met several youngsters including students from IIT, who were staying with him to learn the model, to implement in their own villages.

An inspiring man with a bold vision and a solution that transforms! Check www.ModelVillage.org.in 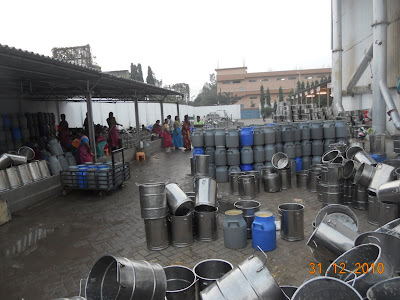 Naandi is into Elementary Education, water, mid-day meals, organic farming and social advocacy. We visited their centralised kitchen which is one of the largest of its kind cooking over 1,20,000 nutritious meals everyday for the children in  Hyderabad’s government schools. We met Ms. Leena Joseph who showed us around the cleaning process, the large steam operated kitchen, the spices section, the packing and loading bays.

We learnt that Naandi works at AP, Rajasthan, MP and Orissa where large centralised kitchens are setup through public-private partnership: Kitchens are funded through donations, rice is supplied by the FCI, Rs.3-4 per child paid by the state government, electricity supplied by the government. The rest including fortification with essential nutrients and distribution to the schools is done by Naandi. Check www.naandi.org 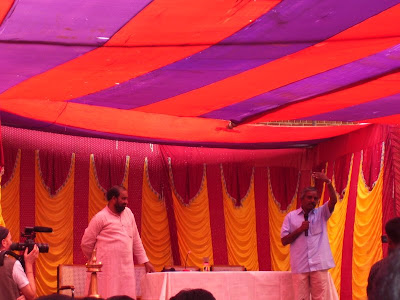 Mr.Joe, a student union leader at Anna University had gone to Orissa along with his friends during a devastating cyclone in the early 1970s and stayed back to work for those people! They started off with education and a bit of health when they realised that water and sanitation were the major sources of health problems. They tackled the issue by constructing toilets and adjoining bathrooms with running water. They also helped in setting up of Biogas plants and smokeless kitchens that help the people, especially women. Men are given training that enables them to get jobs as semi-skilled labourers in Orissa and other parts of India.

Post-lunch, we visited two tribal hamlets, whose families are dependent on shifting cultivation (slash and burn technique) on the hills. As their dug wells and bore wells had dried up, Gram Vikas used a simple, yet fascinatingly simple solution using intake wells and gravity flow water to provide running water without electricity! We checked out the kitchens and stayed there for a while before going to one of their schools.

It has now been 38 years since Joe Madiath came to Orissa. Gram Vikas currently serves over 2, 50,000 people in 701 habitations from 21 districts, including marginalised groups and tribals. www.gramvikas.org

Agriculture, an ocean of opportunity neglected

Mr. Gijs Spoor from Zameen Organics made a short presentation on the work his company was doing and about his own story. He was born in Amsterdam but studied agriculture in India. Spurred by the plight of our farmers in Vidharbha, he got into cotton farming there.

A good speaker in both Hindi and English, he kept us glued to his presentation on his company, their policy on fair trade, the emphasis on organic farming and their ‘pants for poverty’ advertising campaign. He re-emphasised the need to switch to organic farming – lower input costs hence lower risk if the crop fails due to drought, no chemicals, hence better for the environment. Check www.zameen.org

From what we’d heard so far, from several of our role models and panelists it was obvious that agriculture was pretty unorganized and offered immense scope for entrepreneurship and transformation. 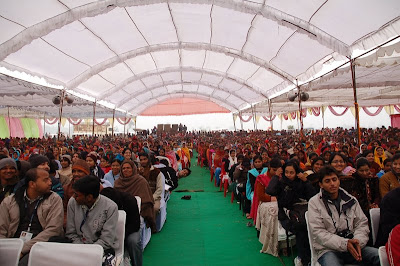 We had previously been grouped under several verticals based on our area of interest like Health, Agriculture, Energy, Tourism, Education, Information Communication Technology, Manufacturing etc. The groups had separate intro sessions to the Biz Gyan Tree – a business plan competition with facts and figures. We were expected to come up with a social entrepreneurship plan for Deoria, one of the most backward districts in UP.

The plan would be assessed based on innovation, feasibility, scalability, replicability, inclusiveness and the use of technology. We sat down in groups under a giant pandal with lots of villagers who had gathered for the event. Some of them were allotted to us to provide insights that would help us fine tune our plans further. One and a half hours later we made a presentation in front of some core team members and the villagers. 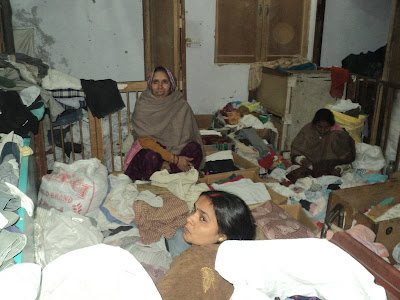 Mr. Anshu Gupta made a passionate plea for clothing and dignity for the poor. The statistics he belted out left none without guilt. Giving away old clothes is the most frequent form of “charity” he said, followed by a stinging query if giving away something you don’t need/can’t use is “charity”. By the end of his presentation he had 400 more fans!

We visited one of their sorting centres where clothes were received, sorted, repaired and salvaged before being distributed to the people in need.

The ‘Cloth for Work’ programme of Goonj motivates villagers to collectively work for community infrastructure projects like constructing bridges, digging wells, repairing roads, building schools etc in exchange for clothes. The ‘School to School’ programme collects discards like old school bags, pencil boxes and books from urban schools and channelises them to rural schools. Annual events bring together both groups (urban and rural) and sensitises the urban parents and their children about the needs of those in rural areas.

Not a piece of cloth is wasted; one of Goonj’s major programmes is to make sanitary napkins from old clothes and give them to rural women. They also provide clothing during disasters and work almost across the country through their branches or partners. They now collect over 50 tonnes of materials every month (not just clothes) and distribute to various parts of India!! Check www.goonj.org 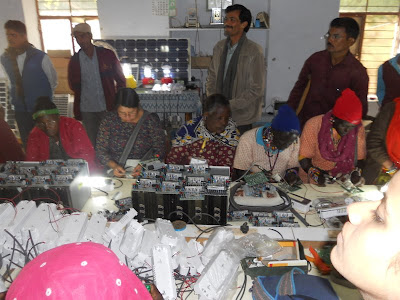 Barefoot college was founded by Mr. Sanjit ‘Bunker’ Roy. Illiterate women from places around Tilonia, other parts of India and Africa were being educated in the fully solar powered campus. We saw people being trained to be dentists, solar engineers, electronic engineers, lab technicians, OPD doctors (Homeopathy, Allopathy and Ayurvedic) etc. We were all stunned to see people of several nationalities in a room, not knowing Hindi or English but learning together and assembling several electronic goods using circuit boards!

People are also taught communication through puppetry, handicrafts etc. The ‘Barefoot College’ which was established in 1972 has centres across the country. Check www.barefootcollege.org

While some groups visited the Okhai SHG groups, my group visited Tata’s watershed programme for a village. After a short bus journey, we had to endure probably a kilometre of rocks and shrubs to reach the place. Out of nowhere in the barren land there was a large man-made dam. The dam served two purposes. One, it provided for an extra season or two of farming apart from the summer crop and two, it also replenishes the wells and stops the inflow of sea water by increasing the ground water. The Tatas, the villagers and the government had all contributed towards the small dam. There was little water when we went, but we were told that the sale of one year’s agro-produce was sufficient to recover the cost of the dam!

The Okhamandal area is drought prone, so the Tatas have helped form self-help groups (supposedly the first in the country) in villages of the area not only to promote better livelihoods but also to nurture handicrafts of the region. Now hundreds of women from this region benefit through the sale of handicrafts they produce under the ‘Okhai’ brand. Some rural BPOs also function in the area which support various Tata companies.

Mithaur was the last stop after which we returned to Mumbai. To put it in a nutshell: Jagriti Yatra is an opportunity to get inspired by amazing role models, make friends for life and have the holiday experience of your life. If you are an aspiring entrepreneur or stuck in a boring job you don’t like, you should definitely make this trip.

Last date to join this year’s Yatra is November 15. For details visit, http://www.jagritiyatra.com/

I was on the Jagriti yatra 2010 as a facilitator, leave a comment if you have some queries – Dr. Prahalathan KK